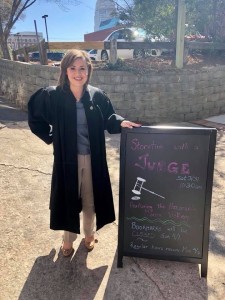 Growing Up
Carrie grew up on a farm in western North Carolina and moved to Winston-Salem in 2000 to attend the UNC School of the Arts for high school where she played the oboe. She graduated from UNCSA in 2003 and completed her undergraduate degree in political science at Western Carolina University in 2006. Carrie was in the charter class at Elon University School of Law where she graduated in 2009 at the age of 22.

Professional Life
Prior to being elected to the District Court bench, Carrie practiced law at the Holton Law Firm. Her practice was almost exclusively in our district courts. Carrie’s practice focused primarily on helping families and children but she also practiced in criminal defense, general civil litigation, juvenile cases, and traffic matters.

Carrie has enjoyed several leadership roles within the legal community and is the President-Elect for the Forsyth County Bar Association. She is a member of the Family Law Section of the North Carolina Bar Association and is also a member of the Chief Justice Joseph Branch Inn of Court. She has previously served on the North Carolina State Bar’s Paralegal Examination Committee. All of these positions have allowed Carrie to interact with many different types of lawyers and legal professionals. In 2015, Carrie was certified as a specialist by the North Carolina State Bar in the area of family law.

Personal and Community Life
CCarrie fell in love with Winston-Salem when she was in high school and even before and has immersed herself in our community. She is a member of the Junior League of Winston-Salem and serves on its Executive Board. She is also a member of the President of the Board of Directors for the Forsyth Humane Society and has served on its Board since 2015. Carrie volunteers with the Triad Golden Retriever Rescue. She is a past member of the Board of Directors for the Liberty Street Community Development Corporation and the Children’s Museum of Winston-Salem. In 2012, Carrie served her alma mater as a member of the UNC School of the Arts Board of Trustees. Carrie and her husband, Phillip, are active members in their church at Reynolda Presbyterian.

Carrie’s family is very important to her. Carrie and Phillip have two dogs: Lionel and Riley, and a rescue cat named Jerry Milo. Her brother, Ray, is a Second Lieutenant in the U.S. Army Reserves and is currently attending medical school in Lynchburg, Virginia, where he lives with his wife and children. Her father still resides in western North Carolina.

Paid for by the Vickery for Judge Committee